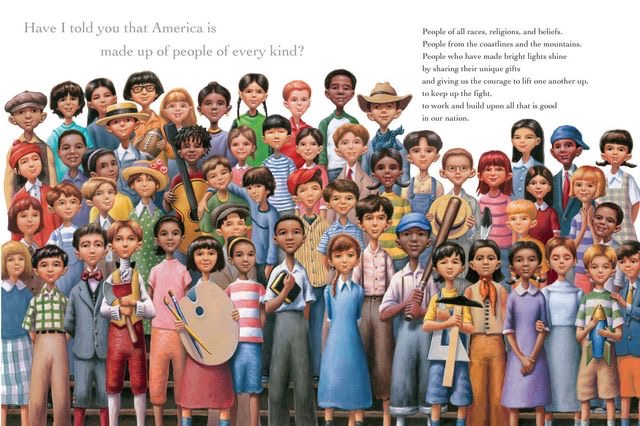 As much as we love to use the melting pot metaphor, can Americans truly accept the implications? Liberals as much as conservatives must accept that secularism actually protects freedom, not by supporting what we agree with, but by allowing the freedom of any Worldview. Whatever our race, or creed, there are many more than our own. And in accepting that diversity, we preserve our own.

The melting pot includes Hindus, Muslims, Buddhists, Indians, Asians, Europeans, Latinos, Africans, Islanders, Protestants, Catholics, Atheists, Humanists, Hippies, LGBTQ, and even flannel wearing Rednecks. Can we handle that? Can we allow enough of a melting pot that gays can marry, that country boys can carry guns, that people can spank their kids when they are bad, or that Mexicans could live in the Midwest? Can we truly live and let live? We need to or else we will all sacrifice freedom of conscience for mob rule.

This is the conversation of the young. What a kaleidoscope nation is. What it sounds like. What the potential is of its muse. The conversation is no longer be about being black, nor female, or even religious. The young don’t really care, because two-thirds of them don’t even know the past anymore. In many ways, letting go of our bitter past is beautiful and has already happened. The new generation has moved on. Left and right becoming obscure. Racial histories forgotten. Religious divisions considered laughable. But can it prevail? I dearly hope so for the sake of our constitutional freedoms.

The real question for today is whether we will allow pluralism to flourish, or if we will continue to cling to our worldview as supreme? Like it or not, Race, Creed, and Sexuality are matters of individual conscience. So if you want your worldview free, then you must allow the opposite as well. Funny, here we are once again, as at the beginning, the Tower of Babel as it were, all together building something, but divided still by definitions. I’m certain we can all agree that freedom of conscience is vital to our constitution, that is, until it shows up in our neighborhoods.